Overview Of: Former SARS Operatives Will Not Be Allowed To Join New SWAT Team - Police

The Nigeria Police Force has disclosed that no former member of the now-disbanded Special Anti-Robbery Squad (SARS) will be a part of the new Special Weapons and Tactics (SWAT) unit.

The Special Weapons and Tactics (SWAT) unit is the new Police unit announced by the Inspector-General of Police to take over from SARS.

The IGP on Tuesday, set up SWAT to fill the gaps arising from the dissolution of the defunct SARS, adding that they are to commence training at the different Police tactical training institutions nationwide, next week.

But Nigerians after the announcement rejected the newly constituted SWAT team, arguing that it represents only a change in name as former SARS operatives will also be drafted to the unit.

But the Police Force, in a series of tweets on Wednesday, said no former SARS operative will be drafted to the new unit.

The Police made this known when it highlighted five cardinal points that will guide the operations of SWAT.

“Operatives of the new TACTICAL team must be free of any pending disciplinary matter especially those touching on misuse of firearms and abuse of human rights.” 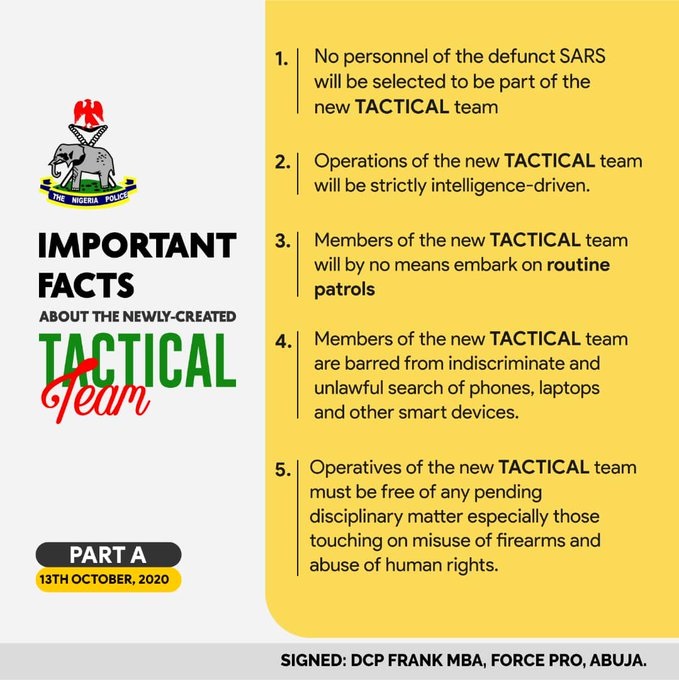